“You're powerful, Garmadon, but don't forget who rules this place with four iron fists.”
―Samukai [src]

Samukai (also referred to as General Samukai and King Samukai) is a Ninjago minifigure introduced in 2011. He was the Skulkin general of fire and former King of the Underworld.

Samukai has four arms and a large head. He has a Skulkin torso with bolts printed below the neck, as well as two skeletal arms. The torso is also printed with a red loincloth. A large piece is used to represent Samukai's armour, back, and lower jaw. It also has two skeletal arms. The area that represents armour is printed in black and has a red Skulkin symbol printed on the centre of the chest. Samukai's head depicts two large, black eye sockets with small, red eyes, as well as a nose socket and printed teeth. He also had two scars above his eyes that are bolted shut. Samukai's feet depict skeletal legs wearing black shoes.

According to the Ninjago Official Guide, Wu and Garmadon defeated Samukai, a warrior, before Garmadon turned evil. Samukai was incapable of accepting his death, so instead of being sent to the Departed Realm, he was sent to the Underworld and became an undead Skulkin. He eventually came to be the King of the Underworld.

After Garmadon had become completely corrupted, he attacked Wu while attempting to steal the Four Golden Weapons. ("Battle Between Brothers") Just as Garmadon was about to kill Wu, he was struck by lightning and fell into a pit that led to the Underworld. There, he was approached by the Skulkin and Samukai, who berated him and his brother. Garmadon asserted that Wu no longer meant anything to him. Samukai then prepared to have his revenge on Garmadon, who then challenged him. Samukai was no match for Garmadon, who quickly defeated him with his spinjitzu. Garmadon then established himself new King of the Underworld; however, he spared Samukai's life. ("An Underworldly Takeover")

Before he began his attack on NINJAGO, Samukai found Dr. Julien and revived him with a potion. Samukai forced him to build powerful vehicles that would aid him with his attack. Julien eventually refused, and was locked away in a deserted lighthouse in the middle of the sea. ("The Last Voyage")

Years later, Samukai lead an assault on the Four Weapons Blacksmith shop to find the map to the four Golden Weapons. He briefly duelled Kai before subduing him, but before he could finish him off, Master Wu intervened. Samukai then used his daggers to make a large water tower begin to fall on Kai, leaving Master Wu with a choice: Rescue Kai, or capture Samukai. Samukai used the distraction to capture Nya, and escape in his Skull Truck. He and his army stole the map from Kai and Nya's shop that leads to the Four Golden Weapons. ("Way of the Ninja")

He then went to find the first Golden Weapon, the Scythe of Quakes, hidden in the Caves of Despair. However, Nuckal read the map upside down, and was digging in the wrong place. After the four Ninja accidentally gave away their presence, he took his army in to fight them and claim the Golden Weapon. Soon after the Ninja discovered Spinjitzu during the battle, he called a retreat, as he could not fight four Spinjitzu masters and the Earth Dragon appeared. ("The Golden Weapon")

Lord Garmadon then gave Samukai new orders: Let the Ninja think they're winning. Samukai continued to seek the Golden Weapons, but allowed the Ninja to dominate until just before they began to search for the Sword of Fire. Then, Garmadon's scheme came into play. Kai was lured away from the rest of the group, and Master Wu followed. Samukai and his army then ambushed Jay, Zane and Cole, claiming the Shurikens of Ice, the Scythe of Quakes, and the Nunchucks of Lightning for Garmadon. ("King of Shadows")

Garmadon then sent him back to the Underworld, where he fought Master Wu, who was wielding the Sword of Fire. Samukai defeated him, and took up the Sword, intending to use the Four Weapons and their power to defeat Garmadon and regain control of the Underworld. However, the power of the Four Weapons united was too much for anyone to handle, and as a result, Samukai disintegrates and The Portal through space and time appears, which was Garmadon's true plan all along. Having succeeded in his plan, Garmadon then escapes through the Portal vowing to return with more power so that he can wield the Four Weapons and recreate Ninjago in his own image. ("Weapons of Destiny")

Samukai's spirit was released from the Departed Realm by Master Yang on the Day of The Departed holiday. His spirit and the spirits of the other departed villains, including including General Kozu, General Cryptor, Master Chen, and Morro, re-entered their statues, reviving them for the duration of the eclipse. Samukai was the first to speak after being revived; He asked the other villains who they were, as they were all unfamiliar with each other. Still confused as to what had occurred, Samukai asked the others what had happened. Morro pointed at the portrait of Master Yang, saying that perhaps he could explain. Yang explained to them that he had returned them to the realm of NINJAGO from the Departed Realm, but they could only remain for the duration of the eclipse that brought them back. He then told them that if they could destroy the ones that had destroyed them, the Ninja, then they could be brought back themselves. The villains then began to discuss which Ninja each of them were to attack, but before long, a fight erupted as a result of their inability to come to terms with each other. Yang immediately ordered them to stop fighting, reminding them that time was running out. Samukai and General Kozu were the last two villains that chose a ninja, but there was only one left: Jay. Kozu did not want to cooperate with Samukai and set out after Jay, but on the way out, Kozu saw Dareth outside and decided to attack him instead. Samukai then made his way to Ed and Edna Walker's (Jay's parents) junkyard, where he kidnapped Edna. He then had Krazi and Frakjaw attack Jay in their mechs, but they were defeated immediately. Jay and Samukai then engaged in a duel, with Ed, Edna, Krazi, and Frakjaw watching. After noticing that his henchmen were not doing anything, he ordered them to seize Ed and Edna in order to save himself. With Jay distracted, Samukai knocked him off the pile of scrap that they had been fighting on. Now having the upper hand, Samukai told Jay that he must kill him in order to be returned, and promised to release his parents. However, Ronin, who was about to burgularise the junkyard, intervened and saved Ed and Edna. This caused Samukai to miss his axe blow at Jay. Now that his parents safe with Ronin, Jay engaged the Skulkin and blasted them with his elemental lightning, sending the trio back to the Departed Realm permanently. ("Day of the Departed")

In LEGO Battles: Ninjago, Samukai appears with many of the other skulkin. He appears in many of the game's cutscenes. Most of these are from the Skulkin story. They are as follows: 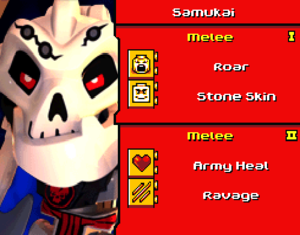 The four-armed leader of the Skeleton Army, Samukai was the ruler of the Underworld prior to Garmadon’s arrival there. He formed an uneasy alliance with Garmadon to conquer NINJAGO and obtain the four Golden Weapons of Spinjitzu. Samukai led the Skeleton Army to the surface, but he was often frustrated by just how dense many of his troops were. When he attempted to use all four Golden Weapons at once, he was destroyed by the energy discharge.

Samukai's four arms made him not only a fearsome warrior, but also a mean table tennis player. When asked why he had four arms, he usually answered, “Because I don’t want six.” He was very grateful to be a Skulkin and only have to wear armor, because he knew the extra arms would make it really hard to find shirts that fit.

The … <b><big>SAMUKAI</big></b><br /><br />The four-armed leader of the Skeleton Army, Samukai was the ruler of the Underworld prior to Garmadon’s arrival there. He formed an uneasy alliance with Garmadon to conquer NINJAGO and obtain the four Golden Weapons of Spinjitzu. Samukai led the Skeleton Army to the surface, but he was often frustrated by just how dense many of his troops were. When he attempted to use all four Golden Weapons at once, he was destroyed by the energy discharge. he was destroyed by the energy discharge. +  and SAMUKAI

Samu … <b><big>SAMUKAI</big></b><br /><br />Samukai's four arms made him not only a fearsome warrior, but also a mean table tennis player. When asked why he had four arms, he usually answered, “Because I don’t want six.” He was very grateful to be a Skulkin and only have to wear armor, because he knew the extra arms would make it really hard to find shirts that fit.ke it really hard to find shirts that fit. +
Theme
Ninjago +
Title
General/King Samukai +
Years
2011 +