Echo Zane is a Ninjago minifigure to be released in 2016.

After Dr. Julien was revived by Samukai and was imprisoned on an island, Julien built Echo Zane as a replacement for Zane, the first Nindroid Julien had built before he died. After Julien was freed from the island and reunited with Zane, Echo Zane was left behind, never being mentioned by Julien again. Several years later, Nya and Jay returned to the lighthouse island as a safe haven from Nadakhan. They soon realise that they are not alone, after they spot Tai-D speaking to a man. After following Tai-D, they discover a secret room in the lighthouse, where Echo Zane is hiding. The pair become friends with Echo Zane, and he aids them in their fight against Nadakhan and his Sky-Pirates. After Nya is kidnapped by Nadakhan and Jay is teleported away, Echo Zane is left behind. Echo Zane is rescued by Jay in an effort to save the rest of the Ninja from Nadakhan, becoming part a team of "Ninja Replacements". The "Ninja Replacements" eventually reach Nadakhan's New Djinjago Kingdom and sneak into a shack after stealing Nadakhan's Sword of Souls. Echo Zane strikes Jay with the sword, causing Jay to become temporarily trapped in it. After Jay rescues the rest of the ninja from the sword, they are discovered by the Sky-Pirates and initiate a fight. However, since Nadakhan is defeated after Jay wishes that Nadakhan was never discovered, all the events that led up to Echo Zane's discovery were undone, and as such Echo Zane currently remains undiscovered in Julien's lighthouse. 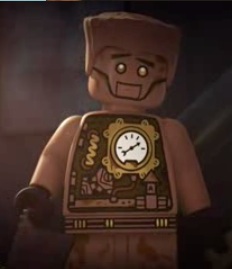 Echo Zane as he appears in Ninjago: Masters of Spinjitzu.