Acidicus is coloured in dark green and has the same snake tail piece like the Serpentine generals, but with slightly smaller lime skales going upward with small, black and triangular, dark red ones to the sides. His head is exclusive to the Hypnobrai, with no visible lower jaw and two fangs. Unlike the others though, his forehead is sleek and resembles a snake hood, covering his four yellow eyes. His forehead is decorated with more lime scales and three white spikes on either side. He has one more sideways fang on either side of his head, under his eyes.

He holds the Hypnobrai Fang Blade made from a silver tooth, a silver handle, and a round, transparent blue, studless piece printed with the Hypnobrai symbol.

In the TV series, he has so far appeared in the fifth episode, "Can of Worms", when he and his tribe were freed from their tomb by Pythor and joined forces with him and the other uniting tribes. After hearing word the ninja were searching for the last two tombs, the Venomari and Constrictai staged an ambush on Kai, Jay and later Cole and Zane, nearly killing them in a venomous lake of acid (the toxic bogs). However, Samurai X arrived and scared away the Serpentine, then knocked them out with sleep gas, allowing Sensei to save them. Later, Acidicus was seen along with Pythor, the ninja foiled the plan by splitting the tribes against each other with rumors, forcing the tribes to fight. He also appeared in the sixth episode "Snake King", when Pythor P. Chumsworth was fighting all of the other generals for their staffs. Pythor won by playing the sacred flute he stole in "Can of Worms", claiming that he would lead the 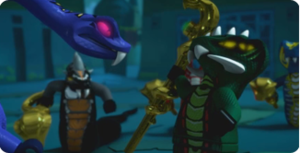 Serpentine into unleashing The Great Devourer, an unkillable beast that would consume all of Ninjago.

In Season 3 episode 1, Darkness will Rise, he and the other generals brainstormed on how they could win the other Serpentine back, where he reccomends realesing a swarm of evil bees, which is rejected by Skales, so they go with Fangtom's plan, which starts with him tieing up Jay. Then, he, Fangtom, and Skalidor rob a bank, followed by the ninja chasing them on the subway, while Skales attacked Lloyd. However, the plan backfires, and Skales is sent to jail.

After 2 episodes of serving Garmadon, he and the other 2 free generals break Skales out of jail with the Serpentine Bus. They end up getting stuck in the Ninjaball Run, which they enter, but they lose to the ninja and retreat.

“Who knows if the legend is even true. I for one, am curious to see what happensss.”
―Acidicus right before Pythor returned with the Fourth Fang Blade.

After the five tribes had united, Pythor, the new snake king, revealed his goal, to unleash The Great Devourer. Soon, Acidicus, Skalidor, and Fangtom took their staff back, because Pythor didn't know where to find the map leading to the four Fang Blades. Skalidor accidentally hit Acidicus, leading in a small battle. The staffs were dropped fairly close to each other, and the venom of the two staffs ran together, and changed colour. Pythor did a similar act with all staffs, put a piece of paper under the venom, and announced that they had a map to all four Fang Blades. When Pythor returned the Ninja stole all four Blades. Luckily, Pythor, having his Anacondrai trait of having the ability to turn invisible, boarded the Bounty and stole them back. They also stole a truck to get to Orabouros. The truck crashed, and all were left behind except for Pythor, who unleashed the Great Devourer, and was eaten by it. The Serpentine realized they made a big mistake to unleash the Great Devourer, and locked themselves up in the Fangpyre Tomb.

This is a description taken from LEGO.com. Please do not modify it. (visit this item's product page) Acidicus is as dangerous as the toxic bogs the Venomari call their home. Victims who have been hit by the Venomari venom hallucinate and sometimes see their worst fears materialize before them.

General Acidius is the brains of the otherwise intelligently challenged Venomari. He has cleverly constructed vials the Venomari can use for carrying extra venom in their combat gear, so they never, ever run out of venom in battle. He strongly supports Pythor’s efforts to unite the tribes and rule the world.