This article is about the character. For the film, see 2854298 LEGO: The Adventures of Clutch Powers. 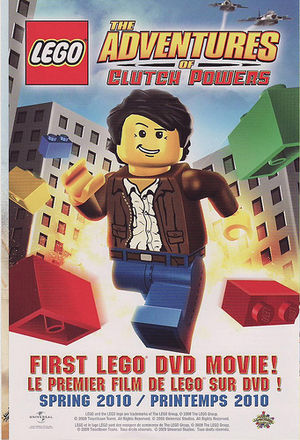 Clutch Powers is featured on the poster of the movie.

“Time to get creative.”
―Clutch in LEGO: The Adventures of Cluch Powers.

Clutch Powers is LEGO minifigure that appears in the movie LEGO: The Adventures of Clutch Powers, released in February of 2010. Clutch is famous, due to being the "greatest LEGO explorer ever", and heroic, but proud. He stars as the main character of the movie and is portrayed by Chuck star Ryan McPartlin.

Clutch Powers is the most famous builder/explorer in LEGO City. In his early life, his father, Rock Powers, was away on adventures most of the time, and on one of these adventures Rock went missing. Clutch still blames his dad for going missing. Clutch's last memories of Rock are his journal and a picture of him. Clutch still looks up to his father, though, and respects the fact that "he never needed a team".

Clutch powers has an Indiana Jones-esque torso. On his left shoulder, he has the LEGO logo, most likely a patch to symbolize him working for the LEGO Team. His hair is a black version of Clone Wars-era Anakin Skywalker's hair. His pants have a new design on them: they show a belt around the waist over an otherwisecompletely blue pair of legs. Also, because of being a LEGO Film minifigure, his legs do not have holes in the back. Clutch has a unqieu head, which has never appeared in a set. On his left arm, he has a red watch that looks like the W005 LEGO Star Wars Darth Vader Watch. During his visit on Ashlar, Clutch had a special holder for a Stormtrooper blaster. It did not work due to Mallock the Malign's evil sorcery.

There is not much of a difference between this version and Clutch's regular clothing. He wears Power Miner Brains' helmet. Clutch uses the visors for seeing through rocks to find crystals. The helmet helped Clutch when he built and flung himself with a slingshot by keeping his head protected while going right through a boulder.

In the chapters "Space Mission," "Looking for Guidance," "Prison Planet," and "Rocket Science," Clutch uses this outfit to breath oxygen outside Earth. It also has a carrier for his blaster. In the movie, he does not have to take off his hair to put on the helmet the suit comes with. Unlike the real minifigure torso, Clutch's has jean straps on the back to hold up the rest of the suit.