"The Snowball Effect" is the eighth episode in the third season of Legends of Chima: The Animated Series, and the 34th episode of the series as a whole.

Laval and Li'Ella's relationship grows as he gives her a tour of the Lion City. But distracted, he misses a key battle against the Hunters. Tormak joins the fight and saves the day. But the Lion King Lagravis is captured and brought to the Ice Fort.

"In the magical world of Chima, the Hunters continue their ice cold attacks from tunnels below the ground. The Phoenix bring down the fire-roaring Legend Beasts to protect the tribes. Eris now has dreams of a mysterious panther and a chilling apocalypse. and Sir Fangar is obsessed with adding the phoenix child Flinx to his collection of frozen trophies." - Opening monologue

Maula and Stealthor report to Sir Fangar in his trophy room at the ice fortress. Fangar questions the whereabouts of the Vultures (who are watching the bears sleep) before ordering them to capture as many animals as possible to add to his collection. He hands Stealthor the frozen Plovar and insists he put the little bird in the "puny" prize section. 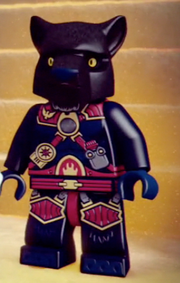 At the Eagle Spires, Eris has fallen asleep in the completely ridiculous section of the library. Suddenly Panthar runs by. Eris gives chase, but as she flies to the ground, the eagle witnesses the entire land being frozen over. She crashes into a block of ice and Cavora collapses. As she screams, Eris wakes up in the library and Ewald scolds her for yelling in the library.

As the sun rises over the Lion City, Flinx and Laval accompany the Lion Legend to the steps of the city where he fire-roars a roll call to which the other Legends answer. Following the Bear's roar, the Vultures move from their hiding place and freeze the sleeping bears.

Meanwhile in the Rhino Quarry, the Rhinos are taking advantage of their intelligence boost by using their Beast's fire-breath to power a machine that turns rocks into more valuable metals. Razar and Razcal watch from a cliff, but are quickly frozen by Maula.

Laval and Flinx arrive at the Crescent in search of Li'ella to take her on a tour of the Lion City. To the lion prince's dismay, Flinx insists on coming along, as he had planned it to be a special time between him and Li'ella. Inside the Blazing Bastion, Eris speaks with Fluminox and Tormak about her visions of Panthar. The Phoenix king assures her it is a gift before they are briefly interrupted by Laval.

Sir Fangar watches the lions and phoenix depart the Crescent from his telescope and is surprised to see Li'ella again. He tells his "trophies" of the first time they met while he was destroying her village and how he believed her to love him.

Back at the Rhino Quarry, the Rhino Legend is lured away and trapped in one of the caves by Mungus and the Mammoths attack the now dumb rhinos. Rinona urges them to use Fire Chi but is quickly cast into one of the caverns along with the orbs. Soon all of the Rhinos are frozen except for Rogon, Runk, and Rukus who had Chied-up earlier to test its capabilities. They use their clipboards as sleds and race out of the canyon where they decide to try out snowboarding on the nearby hills.

Laval and his tour group arrive at the lion city. As the lion prince shows off the lion statues, Flinx shows Li'ella a toy boat and rushes her off to Laval's room to show her his toys. Laval manages to reach his room before they do and throws all of his toys out of the window, unintentionally hitting Leonidas on the head. The lion guard reports the incident to Longtooth in the throne room, and asks if he can take the rest of the day off. Longtooth however objects to the idea and is unaware of the wave of ice seeping down from the Chi fall.

As Laval and Li'ella stand at the steps of the Lion Temple, they notice a band on Hunters marching towards the city and ride the Lion Legend out to face them. It isn't long before the Hunters are on the run, though little does Laval realizes that it was merely a diversion and Sir Fangar's forces have infiltrated the Sacred Pool. Lagravis and the lion guards attempt to fight them off, but without Fire Chi or the Lion Legend, they are all soon frozen. Before they can depart with more Chi however, Tormak arrives, having used the tunnels to follow them. The tiger quickly defeats the Saber Tooth Tigers and unfreezes the lion guards. Li'ella and Laval arrive on the Lion Legend and they push the hunters back into their cave. After Li'ella explains Tormak's past to Laval, the tiger takes his leave. Just then, Longtooth reports that Lagravis was taken by Sir Fangar and has been added to his collection.

Characters (In order of appearance)[edit]