Qui-Gon Jinn is a Star Wars minifigure based on the character from the Star Wars series of the same name. Initially introduced in 1999, this minifigure made a total of six appearances in sets (and one in a Bonus Pack) and four in video games. He has since been redesigned in 2011 for the set 7961 Darth Maul's Sith Infiltrator. 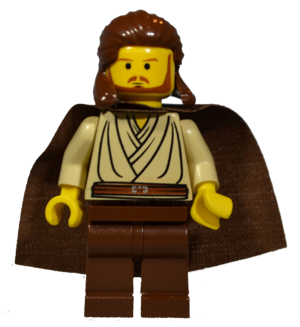 Qui-Gon has had four variations made, one used between 1999 and 2002, one redesigned figure in 2007, and then another in 2011, and finally a very similar version in 2012. The first variant made of Qui-Gon featured him with a light brown torso piece with printing on it to show his Jedi tunic and darker brown belt, and the leg piece was dark brown. This variant had yellow hands and a yellow headpiece, with printing on it to show Qui-Gon's eyes, mouth, beard and eyebrows. In every appearance, this variant come with a dark brown cape and green-bladed lightsaber with a chrome silver hilt. A brown hairpiece was used, which was molded for Qui-Gon. While he is the only minifigure to have it in brown, Bard the Bowman also uses it, but in black. The piece was exclusive to Qui-Gon up until Bard's minifigure was designed. 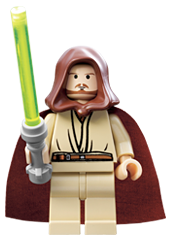 Qui-Gon's minifigure was redesigned in 2007. This minifigure had a redesigned torso piece showing his Brick-Yellow tunic, along with some of his brown shirt near the neck. The utility belt printing was redesigned to be more accurate to its appearance in the film. Qui-Gon's leg piece in this variant was also a Brick-Yellow, matching the predominant color of the torso piece. Due to The LEGO Group's change from yellow to flesh-colored skin in licensed minifigures, this variant had a flesh colored headpiece and hands. The printing on Qui-Gon's head remained very similar to the original variant, however the printing representing his facial hair was a lighter shade of brown. This variant only appeared in the 7665 Republic Cruiser, and had a reddish-brown hood as opposed to a hairpiece. Like in all other appearances, Qui-Gon came with a cape and a green-bladed lightsaber, although a Medium Stone Grey hilt was used as opposed to a shiny silver one. In some sets, he was mistakenly released with Obi-Wan Kenobi's head from set 7255. This was fixed and Qui-Gon was given a new head.

In 2011 a third version of Qui-Gon was released in the set 7961 Darth Maul's Sith Infiltrator. The clothing resembles the original version. He again uses the same special hairpiece. He also has a thicker beard and moustache. This variant has a brown cape, Brick-Yellow torso, brown legs and a metallic silver lightsaber with a green blade.

In the second wave of 2012, another version of the Jedi Master was released. The only difference between this minifigure and the previous one is that his head is double sided. One side of the head has the same printing as the 2011 minifigure, except the mouth is changed to a smile. The other side features a breather mask printed over the mouth area, based on the scene in Episode I where Qui-Gon had to swim underwater to Otoh Gunga. 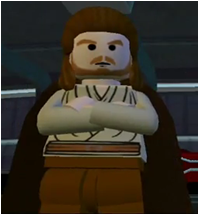 Qui-Gon also appears at the end of the Episode VI mission's cutscene of the game as a Force Ghost with Yoda and Obi-Wan Kenobi.

Qui-Gon Jinn was Jedi Master who carried out several missions for the Order. He was once the padawan of former Jedi Master Count Dooku before he left the Jedi Order and turned to the Dark side of the Force. As a Jedi Master, Qui-Gon took on Obi-Wan Kenobi as his Apprentice. About ten years later, the two were sent on a mission by Chancellor Valorum to enter talks with the Trade Federation, a major group of shipping organizations under the influence of the Sith. The Federation, led by Nute Gunray were blockading the planet of Naboo. Qui-Gon and his Apprentice Obi-Wan Kenobi landed in Gunray's capital ship, and were met by the protocol droid TC-14. Once Gunray informed the Sith Lord Darth Sidious of the Jedi, he was ordered to kill them. The Jedi's cruiser was destroyed, and they were attacked by several Battle Droids, but they managed to fend them off and until they were attacked by two Droidekas. The two managed to escape, and discovered that the Federation was planning to invade Naboo. They stowed away on separate MTT's which were being deployed to the planet's surface, so that they could contact the Queen.

Landing on Naboo, Qui-Gon came across a Gungan named Jar Jar Binks. During an attack on the two by two STAPs, they met up with Obi-Wan. Jar Jar told the two Jedi about a hidden underwater Gungan city known as Otoh Gunga. After traveling to the city and talking with the Gungan leader Boss Nass, Jinn, Kenobi and Binks were given a transport so that they could get to Theed, the capital city of Naboo. The Jedi rescued the Queen from imprisonment, and the Jedi, Binks and the Queen and her entourage escaped the planet, heading for the Galactic capital of Coruscant. However, their ship was damaged from a Federation cruiser during the escape, and could only make it as far as the planet Tatooine. Qui-Gon, Jar Jar, the astromech droid R2-D2 and Queen Amidala disguised as one of her handmaidens and going by the name she was born with of Padmé Naberrie, left the ship and went on a search for replacement parts to fix the hyperdrive. They came across a junk dealer called Watto who had the parts, but like everyone else on the planet, would not accept Republic credits, the only form of currency that the Queen and the Jedi had. 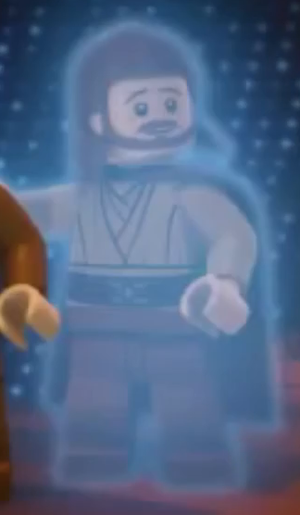 It was in Watto's shop that the group came upon Anakin Skywalker, a slave who worked for Watto and a boy with a very strong connection to the Force. Anakin offered to help the group out by betting on him in the upcoming Podracing event. Qui-Gon agreed to this, and made the bet with Watto. He later renegotiated his bet with Watto to include freeing Anakin from his slavery. With Qui-Gon, Padmé, Jar Jar and R2 looking on, Anakin managed to win the tournament, defeating Sebulba, the Podracer favored to win. Anakin then left his mother to go with Qui-Gon and the others to train as a Jedi. When on their way back, Qui-Gon was attacked by a mysterious warrior dressed in black and wielding a red lightsaber. Qui-Gon managed to disengage from the duel and escape on the royal ship.

The ship and its crewmembers made it to Coruscant; however, it soon became apparent to Queen Amidala that the Republic would not offer any help to them. The group then traveled back to Naboo, planning to defeat the Trade Federation. A battle ensued on different areas of the planet. A group including the Jedi, Anakin and Padmé attempted to retake Theed's palace. Fighting their way through several Battle Droids, the group secured the hangar, before the main door opened with Darth Maul, the same warrior dressed in black Qui-Gon had fought on Tatooine, blocking their path. The Jedi prepared to duel with Maul, while the other looked for an alternate way into the palace's throne room. Qui-Gon and Obi-Wan fought with Maul for several minutes, attacking and counterattacking, until Obi-Wan was cut off from the other two. It was then that Maul was able to overcome Qui-Gon with his double-bladed lightsaber, delivering a blow to Qui-Gon's face with his hilt, and quickly stabbing him. Obi-Wan, after watching his Master stabbed, attacked Maul ferociously, eventually managing to defeat him, slicing him in two. Qui-Gon died in Obi-Wan's arms, telling Obi-Wan to train Anakin. The Trade Federation was defeated soon after, largely due to the fact that Anakin had managed to take out the Droid Control Ship in space in a Naboo Starfighter.

Maverick Jedi Master Qui-Gon Jinn has appeared in seven LEGO Star Wars sets since 1999. There a four slightly different Variants of Qui-Gon' but he always appears in his jedi robe and tunic, ready to undertake a mission for the Jedi Order. Each variant has either his unique brown hair or a brown hood, which helps him keep a low profile.