Cookies help us deliver our services. By using our services, you agree to our use of cookies. More information
Navigation
Actions
Reviews
Fan space
ShoutWiki messages
Wiki tools
From Brickipedia, the LEGO Wiki
(Redirected from Alfred)

“What can I do for you, sir?”
―Alfred's soundbite in LEGO Batman 2

Alfred Pennyworth is a minifigure from the Batman theme in 2006. His variant from the 1966 Batman TV series was released under the DC Universe Super Heroes theme in 2016. A new version of Alfred was released for The LEGO Batman Movie theme in 2017.

Alfred has a Light Nougat head with a thin mustache, laugh lines, and side burns. His torso is coloured black and depicts a black jacket with a grey vest and dark blue bow-tie. His legs are coloured light grey. Alfred has no hairpiece.

Alfred Pennyworth served in World War II. After the war, he went on to become an actor, but, before his father's final wish before his death was for Alfred to become a butler for the Wayne family, which was a family tradition. When Thomas and Martha Wayne were murdered by Joe Chill in Crime Alley, Alfred took care of their son Bruce Wayne. He later became Bruce's confidant, as well as butler when he took on the identity of Batman. He also urged Bruce to accept Barbara Gordon as Batgirl. 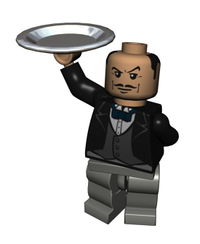 Alfred in LEGO Batman: The Videogame

Alfred appeared as a minor character in Riddler's Revenge and Joker's Return.

Alfred helped Batman and Robin to solve The Riddler's clues before the Dynamic Duo apprehended him and Two-Face.

Alfred reappears in LEGO Batman 2: DC Super Heroes as a playable character. Players can contact him from certain consoles to view a map of Gotham City and summon unlocked vehicles to their location for use.

He appears as a non-playable character in the level "Unwelcome Guests" where he is the citizen in peril and surrounded by flames.

Alfred later appears on the news station where Vicki Vale says he carried the message that a charity event for the zoo animals has been cancelled.

Alfred can be unlocked at the door of Wayne Manor.