Crooler is a crocodile Legends of Chima minifigure released in 2013 exclusively in 70006 Cragger's Command Ship. She is a member of the Crocodile Tribe and an antagonist. Crooler has a supporting role in the cartoon series based on the theme, Legends of Chima: The Animated Series. She is the main antagonist of the first season, as all of Cragger's evil acts are the result of her manipulation.

Crooler is mostly olive green in skin colour, from her jaws to her feet with her hands, upper head, and scales being earth green while her abdomen is light, yellowish green. Her jaw extends forwards like a real crocodile and has similar details pertaining to the head-shape of a crocodile. Crooler has sharp claws on her toes and teeth jutting out of her mouth. Her yellow, reptilian eyes are surrounded by lilac scales.

Crooler wears skimpy and torn, lilac clothing on her waist and chest. On her waist it appears to be a bra that is ripped and is about to fall off. A red, cloth belt extends across his waist and a tail extends down her left leg. A string of pointed teeth is kept to the side of her other leg.

In the way of jewelry, Crooler wears a silver ring on her left nostril, another ring in her navel, a belly button ring, and a necklace extending down from her shoulders, the bottom of which hangs in the center of her chest with a Chi holder. Three, white spikes protrude from it, each from and in a different direction.

In Legends of Chima: The Animated Series[edit]

Crooler's appearance is almost identical to her physical appearance except that she has a tail and more detailed printing. 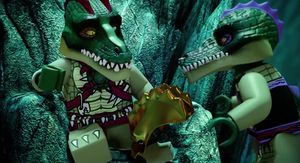 Crooler was a princess and one of two twins born to King Crominus of the Crocodile Tribe and his wife, Crunket, her brother being Cragger who was younger by only a few seconds.

Crooler's relationship with anyone but Cragger and her parents is unknown, and only slightly. She is insightful on her brother and knows where he is strong, where he falls, and how to control him, whether it be for her personal gain or to degrade him.

Their parents tried to warn Cragger not to trust Crooler as their last words before what seemed to be their demise, which left Cragger as king of the Crocodiles. Crooler used a persuader plant to control her brother's thoughts and force him to declare war on the Lions for control of the Chi resource.

Crooler was, in a sense, the real leader of the Crocodiles, her brother being a figurehead who she manipulated.

Soon after the failed attack on the Eagle Spire, Worriz visited Cragger and informed him of the hundred year moon phenomenon that would take place in a few days time. Crooler decided to take advantage of the situation by kidnapping G'Loona and holding her hostage at the Forever Rock in the hopes that Laval and his friends would go looking for her and be destroyed by the insane wolves. Her plan failed, however, as the heroes managed to survive the night. ("The Hundred Year Moon")

After losing faith in Cragger's ability to destroy the other tribes, Crooler allied herself with the wolves, promising to free them from their alliance with the crocs if they helped her with her new plan. During a Speedor race, the villains caused chaos by having Furty spread rumors among the spectators - while the lions tried to break up the fights, Crooler and the wolves snuck into the Lion Temple and stole all of the Chi orbs. They were caught by Cragger, who narrowly avoided being re-brainwashed by Crooler's plant, but managed to escape. Crooler showed apparent regret at the fallout of her plan, but nonetheless kept her end of the bargain and threw the Pledge of the Pack into the Gorge of Eternal Depth. ("Foxtrot")

Crooler returned to the Crocodile Swamp and presented her brother with the stolen Chi. Still enraged by her betrayal, Cragger ordered his sister thrown out of their home. ("The CHI Jackers")

The crocodile princess journeyed to her garden and found that her other Persuader Plants had not yet fully grown. Nevertheless, she harvested the small plants and returned to the crocodile fort, but was denied entry by Crawley and Crug again and was thrown out. She then journeyed to the Wolf Camp where she tried to form another alliance with Worriz, but was thrown out by Windra. She then spotted the wolves' stolen Chi still in one of the pack trackers and snuck back into the camp. She was noticed by the wolves, but to her advantage, a windstorm blew in just then, providing her with the cover to escape in the vehicle. As she raced home, Crooler sent up a croc flare as the wolves closed in on her. She managed to make it to the swamp, yet there she was thrown out of the pack tracker and the wolves reclaimed their Chi.

When it appeared that the tribes were about to sign a treaty ensuring peace between them all, Crooler saw her chance. As the tribal representatives gathered at the Forever Rock, she threw the remains of her Persuader Plants into the fire, creating the Fog of Destiny that nearly drove everyone insane with visions of their fate. Laval managed to dispel the fog, but its effects caused Cragger to believe that he was destined to rule Chima. Unfortunately for Crooler, Cragger had no intention of sharing his power, and had her locked in the dungeon. ("Reunion Gone Wrong")

A few days later, the lion king Lagravis was placed in the dungeon as well and Crooler explained her and her brother's history to him. ("Laval in Exile")

A few days later, the crocodiles were visited by Flinx and Laval who dropped off the Crocodile Legend to guard their village. Crooler noted that it was only her, Cragger, and Crug remaining. They however soon fell under attack by the Hunters seeking Flinx and Crooler grabbed Plovar to defend herself. ("Cool and Collected")

Following Plovar's capture by the Hunters, Crooler went with Cragger, the Crocodile Legend, and a few warriors to find him. ("The King Thing")

After the second Illumination, Crooler became more friendly and even allowed Plovar to clean her teeth. ("The Heart of Cavora")

Following Cragger's successful win at the Speedorz track, Crooler uses her Persuader Plant to convince him to create a machine atop Spiral Mountain that will use the Golden Chi orbs to send Chi droplets everywhere.

This is a description taken from LEGO.com. Please do not modify it. Crooler

Hatched just seconds after Cragger, Crooler is the Crocodile Prince’s ambitious and conniving twin sister. She is constantly goading her brother on and forcing him to take all the risks, while she seeks to enjoy the rewards of his success or mock him relentlessly when he fails. Some creatures see her as the REAL authority in the Crocodile Tribe, which is fine with her. She’s happy to have the power, without any of the annoying trivialities and decision-making of official leadership. She doesn’t exactly want to overthrow Cragger as much as she wants to manipulate him for her own benefits. She is very good at pushing his buttons and pulling his strings. She knows all his weaknesses and insecurities, and constantly plays on them in order to accomplish her own goals and self-aggrandizement. She is truly the most cruel of all the Crocodiles.

view · talk · edit Legends of Chima minifigures
Retrieved from "https://en.brickimedia.org/w/index.php?title=Crooler&oldid=1033553"
Categories:
Hidden categories:
... more about "Crooler"
RDF feed
Appearances
70006 Cragger's Command Ship +
Image
Crooler-1.jpg +
InfoboxTemplate
Minifigure +
ShopDescription
Crooler Hatched just seconds after … Crooler</br></br>Hatched just seconds after Cragger, Crooler is the Crocodile Prince’s ambitious and conniving twin sister. She is constantly goading her brother on and forcing him to take all the risks, while she seeks to enjoy the rewards of his success or mock him relentlessly when he fails. Some creatures see her as the REAL authority in the Crocodile Tribe, which is fine with her. She’s happy to have the power, without any of the annoying trivialities and decision-making of official leadership. She doesn’t exactly want to overthrow Cragger as much as she wants to manipulate him for her own benefits. She is very good at pushing his buttons and pulling his strings. She knows all his weaknesses and insecurities, and constantly plays on them in order to accomplish her own goals and self-aggrandizement. She is truly the most cruel of all the Crocodiles.ruly the most cruel of all the Crocodiles. +
Theme
Legends of Chima +
Title
Crooler +
Years
2013 +